Breathtaking sights and unforgettable memories are always to be had on a trip to Africa! After our stay at the Saxon Hotel in Johannesburg, we headed to visit Victoria Falls on the border of Zambia and Botswana. Zambia is one of the loveliest of all the countries on the continent. In terms of appreciating the natural beauty of the region, however, one location stands out: Victoria Falls. We visited the Falls from both the Zambia and Botswana sides, and though our stay was very wet (it is a rainforest, after all!), we didn’t let the weather put a damper on our enjoyment.

We had so many enjoyable experiences it’s hard to single out just one, so here are some of the highlights from our trip, starting with a bit of background about Victoria Falls itself:

On our first day in the area, we took a helicopter tour of Victoria Falls to get a lay of the land. Located on the Zambezi River on the border of Zambia and Zimbabwe, Victoria Falls is an enormous natural waterfall. It’s considered to be just one of the world’s seven natural wonders, and attracts thousands of tourists each year simply to view its majestic beauty. Though Victoria Falls is not the tallest or the widest waterfall in the world, it measures in at a gargantuan 5,604 feet wide. The waterfall has been there since its geological formation roughly a few thousand years ago, Scottish explorer David Livingstone is considered the first European to have “discovered” it in November 1855. It was him who named the Falls after Queen Victoria of Britain, and additionally, the point from which he viewed the formation, a small island on the crest of the waterfall, is named for his discovery.

The waterfall is formed by six principal gorges, which are narrow valleys between high peaks with steep walls and water from the Zambezi River running through them. It was amazing to see the intersections between the basalt gorges from overhead, especially seeing the path of the water travel from the First Gorge into a deep pool called the Boiling Pot. The Boiling Pot is a bowl in the Second Gorge that has been created by the rough effect of the rushing water on the landform over time, and is characterized by the chaotic, turbulent ebb and flow of the water it holds. It’s extremely dangerous to be near — there are a number of stories about travelers falling in and washing up miles away in one of the later gorges — but from up above, it was truly amazing to behold.

We had a chance to visit Victoria Falls from both the Zimbabwe and Zambia side during our trip. The latter included a safari trip through the Mosi-Oa-Tunya National Park. Roughly translated from Kololo or Lozi language, the park’s name means “The Smoke Which Thunders”, and it stretches about 25 square miles from the Songwe Gorge of Victoria Falls to the Zambezi river bank. It’s located near the city of Livingstone, named according to the colonial explorer David Livingstone as well.

The park is divided somewhat in two between the Falls region and the wildlife region, and we did our best to explore them both. The former consists of primarily rainforest, with exotic trees and plants like ivory palm, pod mahogany, and a number of creeper vines. Many of the park’s wildlife inhabits this area, likely due to its heavy tree cover, including small antelopes and warthogs. The latter surrounds the riverbank, a watering hole for the park’s animal population, which has been rapidly shrinking in size due to factors such as widespread drought and poaching.

We saw a number of zebras, impalas, wildebeest, and warthogs during our visit, but that’s only a fraction of the creatures living in the park. There are many endangered species living in the area as well, making each safari a chance to spot an animal elusive to other visitors.

Speaking of elusive wildlife, we also were lucky enough to take a police-led tour of the protected rhinoceros herd in the park. The rhinos are guarded at all times to ward off poachers, as they are a highly endangered species. In the past ten years, nearly 6,000 rhinos have been killed by poachers looking to use their horns for various purposes. Though they have no proven benefit in Western medicine, many cultures believe that the rhino horn can be used to treat an assortment of ailments ground into a poultice, while others simply value it as a status symbol or art piece. 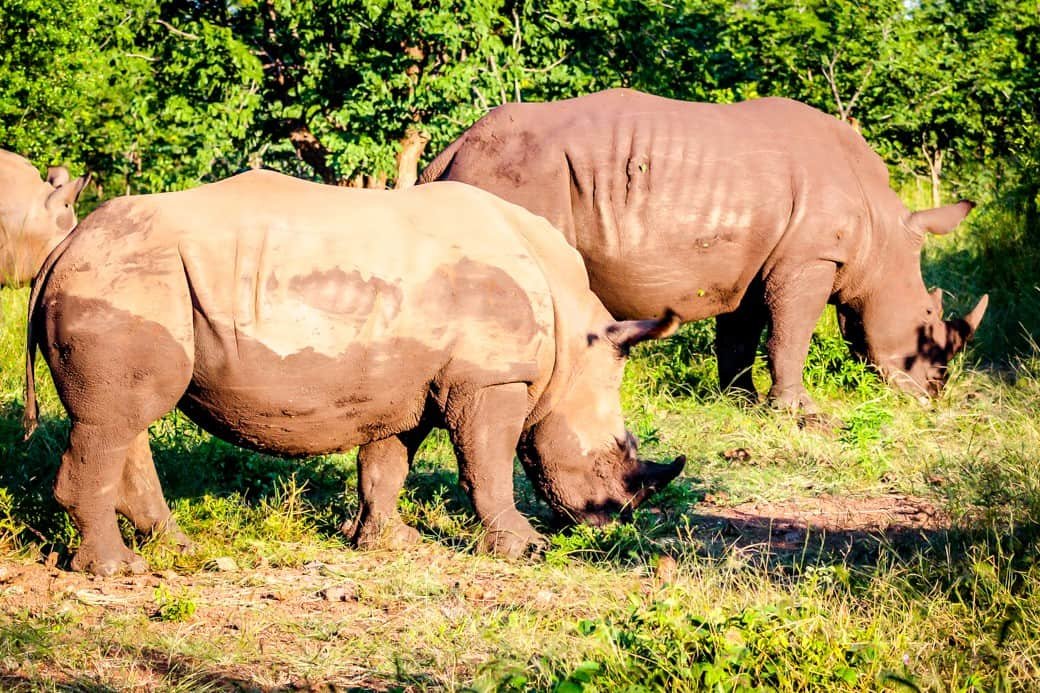 Either way, seeing them up close affirmed for us that protecting these animals is essential to their survival. The Western black rhino was declared extinct in 2011, and it is the mission of anti-poaching activists to ensure that does not happen to any other species.

On the Zambian side of Victoria Falls, we also saw the Knife-Edge Bridge, constructed in the 1960s to make the Falls and surrounding gorges more accessible by foot. That being said, there’s a reason it’s likened to a knife’s edge… the bridge is high, narrow, and an extreme adrenaline rush! Because it stretches over the waterfall, the air around the bridge can quickly turn into a cloud of mist, making it even more nerve-wracking to navigate — or, for the adventurous traveler, maybe all the more exciting. The Knife-Edge Bridge also gives a stunning view of the Boiling Pot formation in the Second Gorge, but from a sensible distance.

Named for Dr. Livingstone’s friends Sussi and Chuma, the Sanctuary camp is located along a breathtaking stretch of the Zambezi River. Surrounded by palm and Jackalberry trees, accommodations here are intimate and close-knit, with only about a dozen private rooms available. The Sussi tree houses and Chuma two-bedroom houses are connected by wooden walkways along the river, combining the tranquility of nature with the privacy of a romantic retreat. The camp also offers guided safaris through the park, a sunset boat ride down the Zambezi, and other exciting opportunities to engage with this natural wonder.

After a long day of taking in awesome sights, we took a relaxing cruise down the Zambezi River at sunset. The river feeds into Victoria Falls, in the “Middle Zambezi,” while our tour mostly encompassed the “Upper Zambezi” before it. Named the “Great River” for its size, the fourth longest in Africa, boating on the Zambezi is a great way to unwind and truly absorb the environment around you. Because the pace of a boat ride is slower than other methods of travel, it is a great opportunity to take some gorgeous photos of the sunset on the horizon, sip an evening cocktail, and recount the day’s adventures. The route spanned two of the great rapids before eventually stopping at a beach area along the banks to watch the sun’s final descent.

In addition to spending the bulk of our time discovering the great outdoors of Victoria Falls, we also had truly a lovely lunch at the Victoria Falls Hotel. Built in 1904, the hotel is steeped in history and colonial charm, from its simple, elegant decor to the number of historic sites nearby. The hotel used to run a trolley service in the early 20th century, and a placard and monument outside commemorate its legacy. It is also located just a short walk from Victoria Falls itself, making it incredibly convenient for travelers like us who were eager to see it all!

We also had a delicious lunch here at the hotel’s restaurant on the second day of our stay. Diners have the option of eating in the refined Livingstone room, which the hotel is known for, or the outdoor Jungle Junction for a more casual experience, both sharing the same menu of delectable offerings. Fresh vegetables and perfectly cooked meats characterize their food, and any option you choose will not disappoint! Stanley’s Terrace at the hotel is also available for tea in the afternoon, overlooking a gorgeous vista. For a nightcap, Stanley’s Bar is full-service, and for non-alcoholic guests, their lemonade is tart and refreshing.

Victoria Falls was an impressive landmark with stunning natural beauty and historical significance. It’s easy to see why it’s considered one of the Seven Wonders of the World. Despite getting completely drenched in the wet and humid climate, we really enjoyed navigating the winding paths of the rain forest and taking in breathtaking sights from high above the Falls. The area is lush and thriving with deciduous plants, as well as a wide array of wildlife around every corner. On top of it all, our accommodation was comfortable and relaxing, turning a high-energy trip into a refreshing getaway at the end of the day. I would love to visit Victoria Falls again and spend more time exploring the national parks — there was just no way to see it all in two days. Our next stop was the wonderful Sanctuary Camp Chobe Chilwero near Kasane, Botswana.

Have you had a chance to visit Victoria Falls? How was your experience? Any recommendations? Comment below!

Celebrate Life’s Bubbly Moments! My name is Emilia and I am a full time Orthodontist. When I am not creating beautiful smiles, I love spending time with my family and my beagle puppy, Max. I enjoy traveling, running, yoga, and reading.